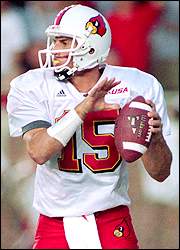 For only playing each other one time ever in football, it sure seems like fans are mad at Duke heading into this Friday’s game. It’s not really their fault. They just happen to be the next team in our way after a heartbreaking loss and then a bye week. The only time the Cards have faced Duke was back in 2002, a 40-3 win by Louisville on the road.

The first score was a safety, putting Louisville up 2-0. From there, the route was on. Dave Ragone threw two touchdown passes; one each to Ronnie Ghent and Dontay Spillman. Later, Louisville blocked a punt that Brandon Johnson returned for a touchdown. They went into the half leading 26-3.

Henry Miller scored a 42 yard rushing touchdown, so he actually did score in another game outside of Florida State. Who knew? Probably Kelly Dickey. Stefan LeFors added a touchdown pass to Ronnie Ghent in the 4th quarter to finish the scoring for the day and get to the 40-3 final.

Louisville would finish the season 7-6, including that win over Florida State in the rain a couple of weeks later. Duke would finish 2-10 and 0-8 in the ACC.

I would expect a similar scoring margin this Friday, although the 40 points seems a little low.