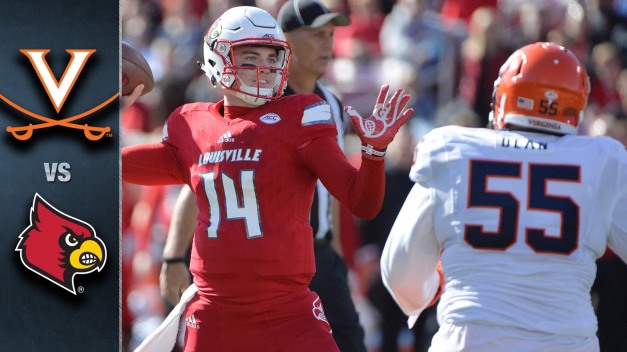 Virginia  came into Papa John’s Cardinal Stadium last November and almost left with a victory. The Cards escaped 38-31 to improve to 6-4 on the season. Here is how different things were. Louisville threw two touchdown passes. One from Kyle Bolin, and one from Reggie Bonnafon. Granted, the Bonnafon pass was on a trick play. Lamar Jackson did not attempt a pass. He had one rush for 45 yards. Oh, and Cole Hikutini DID hurdle over someone. Some other stats of note and a highlight video…

-Brandon Radcliff rushed for 146 yards and 2 touchdowns on 21 carries.

-James Quick played, but did not catch a pass.

-Cole Hikutini led the Cards in receiving with 4 catches for 59 yards and 1 touchdown.

-Virginia’s Taquan Mizzell had 13 rushes for 47 yards but also caught 9 passes for 89 yards. He is back this season and is still a threat to catch passes out of the backfield.