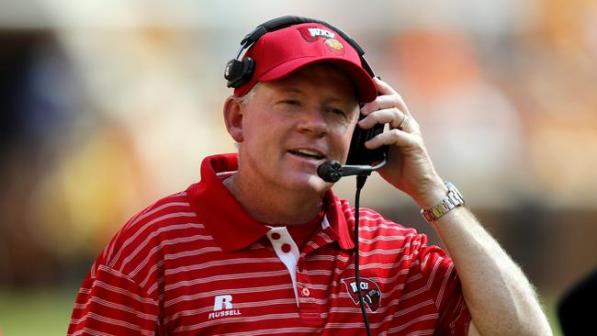 We posted here a few days ago that there were reports of Louisville and Western Kentucky playing a 2019 neutral site game in Nashville. Now it appears we will get that, plus two more games in 2018 and 2020, both at Papa John’s Cardinal Stadium.

“It’s great for both schools that we were able to resume this series against an in-state school of Western Kentucky’s caliber,” Vice-President/Director of Athletics Tom Jurich said. “Because of the proximity of both schools, I think it’s a tremendous win for the state of Kentucky and each fan base. I’m thrilled we were able to lock down a three-game series versus WKU. ”

Western Kentucky is currently coached by former Louisville QB Jeff Brohm. Both Greg Brohm and Brian Brohm are on staff with Jeff. No telling if he will still be there when we play in 2018. But either way, I prefer this game over the likes of a Charlotte or Marshall. It will be exciting for the fans to have the two best teams in the state play against each other.

That would give Louisville non-conference games in 2018 against Alabama, Western Kentucky, Kentucky, and Indiana State.

In 2019, the Cards will play Notre Dame, Kentucky, and Western Kentucky.

In 2020, they will play Notre Dame and Western Kentucky.