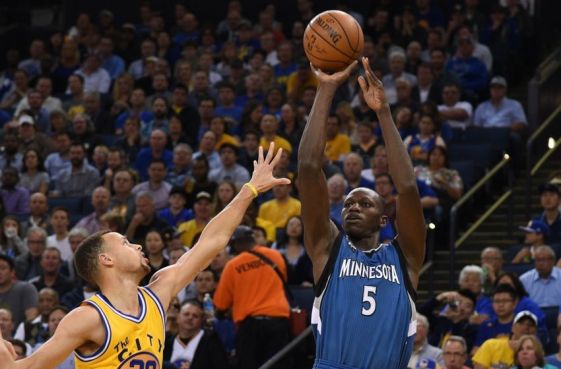 Former Card Gorgui Dieng has signed a four year extension for $64 million with the Minnesota Timberwolves. Gorgui is in his fourth year in the NBA and has career averages of 8.5 points and 7 rebounds per game. Through two games this season, he is averaging 13 points and 13.5 rebounds per game on a young Timberwolves team that is expected to be exciting to watch and contend for a spot in the playoffs. Check out Gorgui’s post on Instagram, where he even throws in some love for UofL in the hashtags. Oh, and is he wearing a mood ring?!

I just want to thank my family ,the Timberwolves organization, Mr Taylor , the fans who I love dearly , the city that I'll call home for 4 more years , the coaching staff ,my agents and last but not least the man who believed in me and took a chance on me Flip Saunders RIP. Let's get a championship yall. #4moreyears #Cardinals #Twincities #myhomeawayfromhome.

Official release from the Timberwolves:

Minneapolis/St. Paul – The Minnesota Timberwolves today announced the team has signed Gorgui Dieng to a contract extension. Per team policy, terms of the contract were not disclosed.

Dieng, 26, enjoyed a career season last year, his third in the NBA, averaging a career-high 10.1 points, 7.1 rebounds, 1.7 assists, 1.2 blocks and a career-best 1.1 steals in 82 games, 39 starts. Originally acquired by the Wolves from the Utah Jazz in a trade on June 27, 2013, Dieng has improved his scoring average in each of his three seasons in the NBA, as well as his field goal accuracy and free throw percentage. The 6-11 center shot a career-best 53.2 percent from the floor last year, good for 10th best in the NBA, as well as 82.7 percent from the free throw line, also a career high mark.

For his career, Dieng has registered averages of 8.5 points, 7.0 rebounds, 0.9 steals and 1.3 blocks in 217 career games, 105 starts, all in a Wolves uniform. Dieng has tallied 44 career double-doubles, including a 22-point, 21-rebound game March 20, 2014 at Houston. In doing so, Dieng became just the fourth NBA rookie in the past 20 years (Joe Smith, Tim Duncan, DeJuan Blair) and the fifth Timberwolves player (Kevin Garnett, Tom Gugliotta, Al Jefferson and Kevin Love) to accomplish that feat. Dieng earned Western Conference Rookie of the Month honors in March of 2014 and played in the BBVA Rising Stars Challenge in 2015.