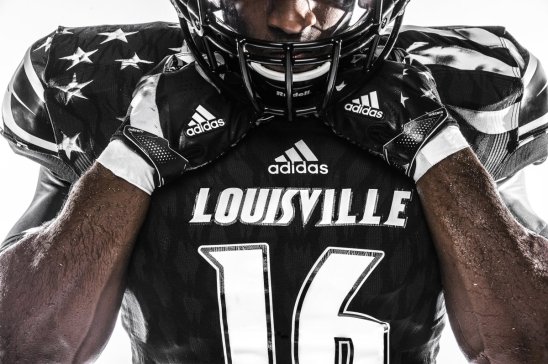 When Louisville plays Wake Forest on November 12 at 7:00, they will be wearing these new uniforms to honor the Armed Forces. They are Adidas’ new “Young Patriot” uniforms. More pictures below. 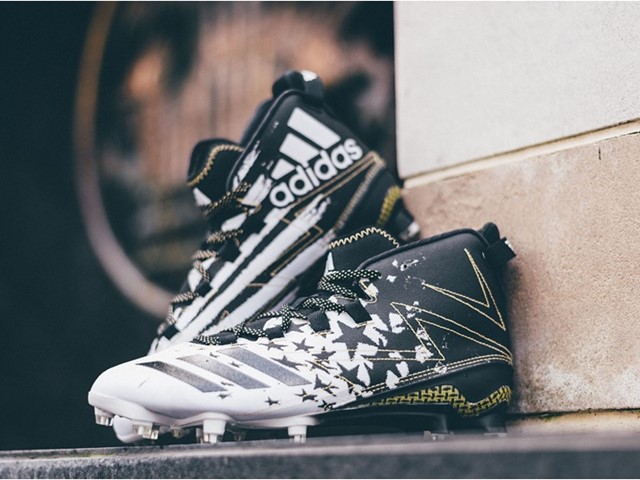 LOUISVILLE, Ky. – The University of Louisville and adidas today unveiled the ‘Young Patriot’ pack, featuring the Primeknit alternate football uniform and the adizero 5-Star 6.0 x KEVLAR® and FREAK x KEVLAR® cleats. The special edition pack pays homage to the nation’s active duty members and veterans, while creating a bold alternate look for the Cardinals for their game against Wake Forest on Saturday, Nov. 12 at 7 p.m.

The game serves as Louisville’s annual Military Appreciation Game salute to honor those who serve and have served in the United States Armed Forces.  Over 1,500 tickets have been generously donated by BAE Systems of Louisville and Humana to distribute to active duty soldiers, Veterans, and their families.

During the game, Papa John’s Cardinal Stadium will dedicate an unoccupied chair that is to remain perpetually empty. The Chair of Honor will pay tribute to the more than 91,000 service members who are POW and MIA since World War I – including current POWs.

The Chair of Honor, which will be permanently installed on the east terrace, will be accompanied by a plaque that reads: “This unoccupied chair honors those who are Prisoners of War (POW) or Missing in Action (MIA) and symbolizes there will always be a place in this stadium awaiting their return. You will never be forgotten. Dedicated November 2016 by the University of Louisville Cardinals.”

The chair symbolizes that those still listed as Prisoner of War or Missing in Action will always have a seat awaiting them at Papa John’s Cardinal Stadium when they return home.

Other Military Appreciation Game tributes will include a special welcome to the Kentucky Department of Veterans Affairs, in-game recognition of UofL student veterans (current students at UofL who have or are currently serving), and fan interactions with the Kentucky National Guard display vehicles in Bud Light StreetFest.  Additional activities throughout the game will be conducted.

About the adidas ‘Young Patriot’ uniforms
Inspired by patriotism and influenced by street culture, the new special edition uniform fuses traditional stars and stripes shapes and patterns with a black and white color palette that’s currently seen in street culture apparel trends. With bold black as the base color, the jersey features a white Louisville banner logo and player numbers across the chest, while the pants feature the iconic Cardinal logo on the left leg that matches a black helmet with a white Cardinal logo.

Highlighting the jersey are flowing stars that blend into waving stripes across the shoulder pads. The unique design takes cues from the shock waves and vapor trails created by the U.S. military’s fastest planes. The progression of the design mimics a spiral design reminiscent from scenes left behind in the sky after fighter jets fly over football games during the national anthem.

Made with a cutting-edge, proprietary yarn blend that increases durability and abrasion resistance, Primeknit is the premier compression uniform system, featuring the latest generation of adidas TECHFIT technology. Primeknit helps keep players cool and increases range of motion, giving athletes an unrivaled level of comfort and allowing them to perform at their highest levels. The jersey’s padlock system secures tension over the shoulder pads, while the bodymap fit adheres to the player, making it difficult for opponents to grab, hold or tackle.