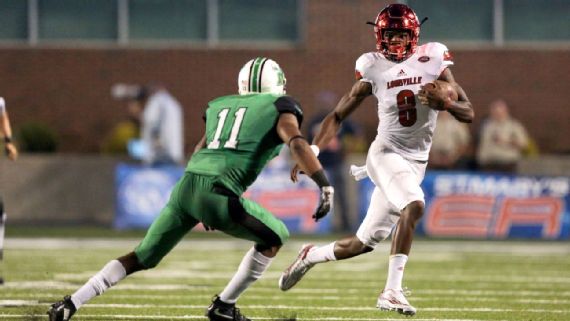 Lamar Jackson wrote an article for The Players’ Tribune that just posted this morning, and it is pretty awesome, to say the least. He is very transparent about his first play in college, losing to Clemson, his favorite player growing up, and more.

I scrambled to the right, running for my life, and then right before I got to the sideline I heaved the ball to a spot where there were a lot more blue jerseys than white. Sure enough, an Auburn player came down with the ball.

Want to know the funny thing, though? Looking back, I’m kind of glad that was how I started out my college career. It was kind of a relief to screw up right away. It sort of cleared my head. After that, I didn’t have to worry about what would happen if I threw an interception. I didn’t have to worry about being perfect. All I had to do was go out there and play the game the way I was raised to.

After that, it was game on.

Offers rolled in from a lot of schools, but after I did some research I knew that Louisville was the right spot for me. The Cardinals were on me early, and I always knew that I wanted to go to a school out of state to experience something new. When I first heard from them, I started looking into how Coach Petrino developed players. He was somebody who had always adapted his offense to the talent he had, so I got excited about how I could fit into his scheme. When I finally met him, I was impressed. He didn’t try to pretend to be somebody he wasn’t or tell me I was the greatest person to ever play. He told me exactly what he wanted out of me — my very best. I could tell right away that he could help me get better. Simple as that.

You know, before that, I’d never taken the time to really closely watch myself play. I didn’t know what to look for. But slowly, as I started reviewing each of my plays from that season one by one, I started noticing little corrections I could make in order to turn a first down into a touchdown. That was exciting because I began to see, right there on film, just how much I could improve in this system. I could tell that once everything clicked we were going to be trouble for any defense we faced.

As good as it felt to beat Florida State, it hurt just as bad when we lost to Clemson. It was kind of crushing because of how the whole team put it all out there. It was tough to swallow. But at the same time, it was one game. The only way to really move past it was to come together, and keep balling. I think the loss to Clemson was kind of like my first pick. We absorbed it — and then set out to make sure we don’t experience anything like it again.

Now I think we’re ready to take on whatever’s in front of us.