It was 10 years ago…. 2006, we were young men just coming to our own. Some of us fresh out of college and some just getting established in our grown up jobs. We got together that summer and decided this was the year, the year we take the plunge and buy season football tickets. Little did we know that that decision would change the tailgate game forever.

As the 2006 season chugged along, we had a few decent tailgates, but November 2 is the date when we realized exactly what we were capable of. It was #5 Louisville vs #3 WVU on a cold Thursday night and a prime time game. This was the first time that we really went balls to the wall for a tailgate. We set up shop at 7 a.m., had a breakfast, lunch, and dinner menu planned out. Shit tons of beers and liquor. Games of cornhole being played for 11 straight hours. We dressed up in Halloween costumes, led countless CARDS cheers, whatever you can imagine, we probably did. 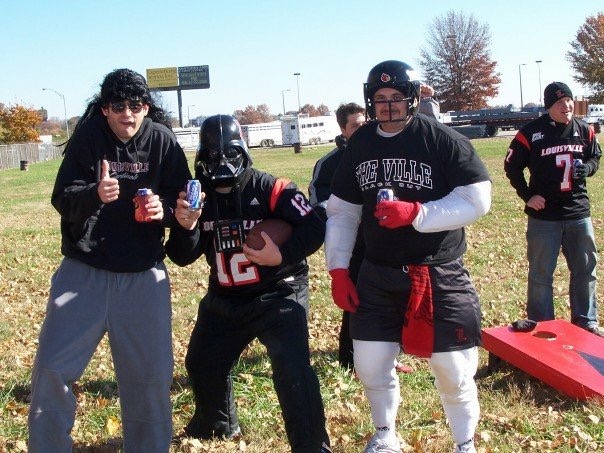 So of course as you know, UL won and went on to have a fantastic season, but that singular moment in time is when we realized “Holy shit dudes! We are really good at putting together a tailgate!” And thus, the RRTG was born.

Now I must admit, even as top shelf tailgaters, we couldn’t even escape the pure shittiness that was the Steve Kragthorpe era. The bad football definitely had an effect on us and we struggled with our tailgate abilities at times. Did we still run a great tailgate? Absolutely! Did it ever live up to the 2006 season? Hell no, but all of that changed in December of 2009 when Coach Charlie Strong came to town. Everyone’s spirits were raised, including our own. We knew we had to step it up. We had to find a way to separate ourselves from every other great tailgate at Louisville. That’s when out of the blue, actually almost like a sign from the tailgate Gods from above, we got a call from a friend.

He was selling his 1986 Chevy Box truck and was just wondering if we knew of anyone looking for such a vehicle. This, my friends, was when a brilliant idea was formed. What if we buy this truck and convert it to a tailgating machine?! This…. This is how we separate ourselves.

As we contemplated this idea, our First Lady of the RRTG, Mrs. Kelly Durst, went ahead and bought the damn thing as a surprise for her husband, our President, James Durst. The first thing we had to do was gut the thing. I mean it was filthy inside, hydrolock blocks, wood, oil, just all kinds of shit, but talk about having a blast! Getting the original Rage ready for tailgating was some of the best times we’ve had as friends. It really was a labor of love and just a great experience. 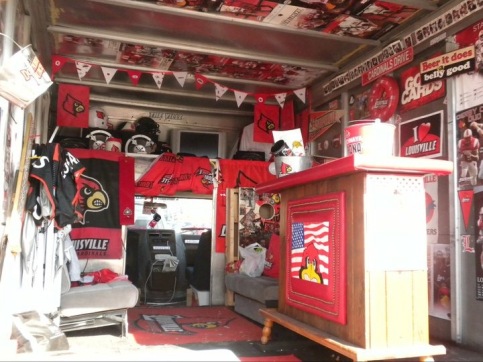 So now we have this amazing machine and lots of friends who are ready to party along with the RRTG. This led to mass amounts of phone calls and text messaging. Having to answer these questions all the time got to be a little too much. The biggest problem was all three of us, James, Josh and David were basically answering the same questions, so that’s when RRTG social media was established. Originally it started just as a way to let our friends know what the tailgate plan was for the day, but now it has grown into so much more. It’s amazing what you can do when you can reach out and connect with most anyone. We’ve been able to meet a ton of awesome people and make a lot of new friends and do many cool things because of it.

But back to the main story here, the Rage itself. After four glorious years, it was time to change up the Rage design. Charlie left for Texas, Bobby was coming home, and we were about to start our ACC adventure. What better time to overhaul the RRTG. After much deliberation, we decided to really concentrate on the Red Rage logo theme. We painted up one side with the Red Rage logo, made the Heisman bird bigger, blacked out the cab, you know, really classed it up. One problem though! The Rage had had enough. Her poor inner workings just weren’t strong enough anymore. 28 years of hard labor were enough. On the way to the opening game of the 2014 season, she died on I-65. Knowing she was done but feeling like we owed her one more season of great tailgating, we had our good friend Russell literally haul her on a flat bed trailer to every home game for the rest of the season. We sent her out with a bang, just the way she would have wanted.

So this brings us to the current RRTG, a 28′ trailer of pure tailgating power! Josh, our Vice President, stumbled upon her while visiting his buddy Nick’s work. You see, Nick works for a company that repairs trailers and there had been a trailer dropped off and never picked up. This trailer was perfect for what we were going for. A huge trailer with room to do most anything we could dream up. The other fantastic thing about a trailer is the fact that the maintenance is far less than an actual vehicle. We ended up purchasing this trailer from a lawn service for only $500 bucks…. 500 BUCKS, can you believe that?!

Once again, spending all summer converting this thing into a tailgating machine was one of the best experiences of our lives! It was great getting to share the progress with everyone on social media and seeing the support from fellow Cardinal fans was amazing. 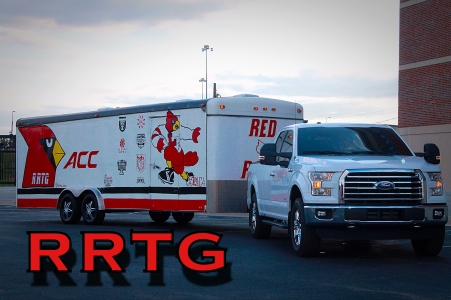 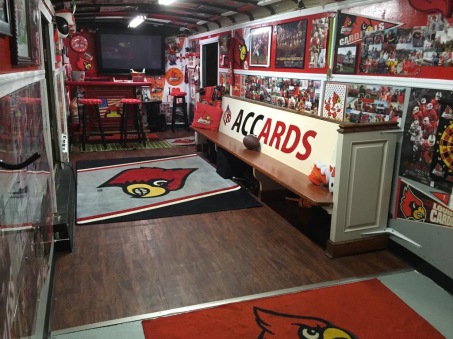 Last season was when we truly seemed to actually expand our brand. We hosted a huge tailgate with free food and drinks at the Chick-fil-A kick off game, along with having 93.9 The Ville broadcast CSZ and Ramsey & Rutherford live from the tailgate. We’ve been able to make great friends at 93.9 and also with some local restaurants like Saints Pizza Pub.

Recently, we have started a website and even brought our great friend and Internet champion Justin Renck on board to run the show. So that’s the story of the RRTG. We hope to expand even more over the years and hopefully get to add to this glorious story. Make sure you come out and tailgate with us…. The Red Rage Tailgate

2 thoughts on “About the RRTG”