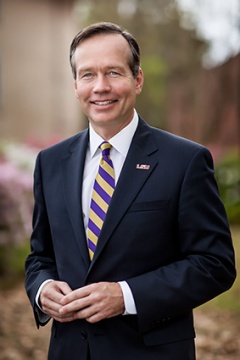 Here at the Red Rage we understand that everyone in the City has a great respect for our opinions and that we have a major influence on all decisions being made at the University of Louisville. “With great power there must also come – great responsibility” – Uncle Ben
Because of this we did our due diligence before choosing the next president of the University of Louisville. F. King Alexander. Our decision boils down to four reasons.

1. #BringKingHome – F. King Alexander is the current President of LSU but was born in Louisville and served as President of Murray State University from 2001 to 2005. The man knows Kentucky and its politics, giving him the ability to work with Frankfort to keep UofL progressively moving forward.

2. Track Record – President Alexander has been very successful at every stop during his career. During his time at Murray State University, he lead the construction of the Alexander Hall of Education, Thoroughbrewed Café, and the Susan E. Bauernfeind Student Recreation and Wellness Center. At Cal State Long Beach he was twice honored as the California President of the Year as well as overseeing the construction of $70 million dollar Student Recreation Wellness Center and the $110 million dollar Hall of Science Building. He increased enrollment by 2,000 students and was presented with the California Humanitarian Award. Everywhere F. King Alexander has been has seen growth that benefits student life and its university.

3. He LOVES basketball – King Alexander played college basketball at St. Lawrence University and has remained an avid sports enthusiast. Not only does he passionately attend basketball games, he also plays pick-up games with students. Here is a link to an article about his passion for the game. His love for sports, especially basketball, makes F. King Alexander the perfect fit for UofL.

4. His Name – If F. King Alexander was to become president at the University of Louisville and he did something incredible we would be able to yell out, F-KING ALEXANDER!
We asked WDRB’S Eric Crawford about Alexander to UofL on Twitter and his response was, “Not sure why you’d leave LSU to come to Louisville:” I don’t know the answer to this question, but I do know that we have a guy named Tom here who could persuade a vegan to eat a t-bone if given the task.

If we have convinced you that F. King is the right guy for UofL, then take to Twitter! Use #BringKingHome and let everyone know you are on team King. F. King Alexander’s Twitter is @lsuprez.